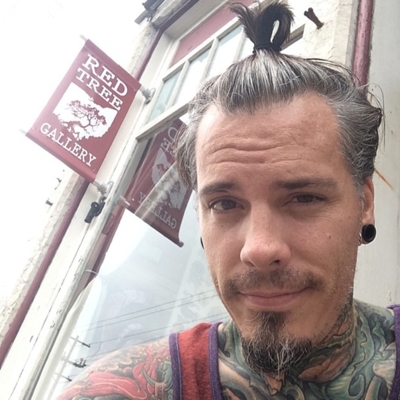 Born in Newark, Ohio on December 28th, 1972, I graduated high school in 1991. Surviving a challenging childhood, I saturated myself in art and went on to excel in art classes throughout high school with dreams of attending art college. At the tender age of 14 a few of us punk, skateboard kids decided to bust into mom's sewing machine kit and tattoo each other with small handpoked designs. I was slowly brought into the world of tattooing through a family member, and eventually abandoned the art college dream to focus intensely on the art of tattooing, which I have since dedicated my life to. I was mainly self-educated from the start, having a bunch of crazy punk rock friends that allowed me to tattoo them which helped me learn quickly. I began using professional equipment at the age of 17, which was the beginning of my actual tattoo career. That was the moment that fueled my fire for tattooing, making my interest in tattooing grow quickly, sending me on an amazing journey through life!

At the age of 18, Immediately after I graduated high school, I began working in a professional tattoo studio to work with Tim Miller in Columbus, Oh. I later decided to travel the country tattooing, sight seeing and generally learning from artists around the country, eventually settling down in Anaheim and Huntington Beach, California. Early in my career in 1994 I began receiving dozens of awards for my work and started to get my tattooing published in every major tattoo magazine. I later met the infamous Sailor Moses (R.I.P.) while traveling the country, and worked his booth at Sturgis in 1993. He later gave me the invitation to move to Biloxi, MS to learn more from him, which was an amazing experience. In 1994 I moved back to Columbus to open Stained Skin, which went on to become a staple in the tattoo industry. In 1999 I opened my second studio in my hometown of Newark, Ohio called Second Skin. My studios have always had an incredible amount of intensely talented tattoo artists working there over the years, which gave me the opportunity to constantly grow and expand, meeting new artists, and learn new techniques. I have since sold both studios to focus intensely on personal fine art and design work, The Hell City Tattoo Festival, True Tubes, True Needles, True Grips, , Writing for Tattoo Magazine, Pint Size Publishing and other various projects.

Today, I am a proud father to Sid Morrison and I also organize and promote the Hell City Tattoo Festival in Columbus, Ohio and also in Phoenix, Arizona, which has become one of the tattoo industry's favorite conventions. I have consulted for some of today’s top tattoo conventions. I currently tattoo privately as well as on the road at conventions and guest spots. I have had artwork sell in numerous art galleries throughout my career. I have recently become a contributing writer for Tattoo Magazine, where I interview other tattoo artists. I am very much an Apple Computer advocate and do a lot of design work on them for my own personal art as well as designing many things for Hell City and other companies! My interest in Apple’s iPhone sparked my interest in designing apps that give back to the tattoo industry and are educational as well. I have recently released my first “Pint Size Paintings” app on the iphone with more in the works. I’m also the owner of Pint Size Publishing, which has released Volume #1 “Miniature Paintings By Big Artists” the first of many pint size books to come. I also developed True Tubes Steel Tip Disposable Tattoo Tubes, which is the industries most innovative disposable tube to date. True Tubes have revolutionized disposable tubes and are used by todays best tattoo artists.

When I'm not working (which is rare) I find time to paint, write, design, play paintball, mma, snowboard, play video games and hang out with family and friends. I enjoy other mediums of art outside of tattooing, including wood sculpture, metal sculpture, watercolor, oil painting, acrylic painting and graphic design.