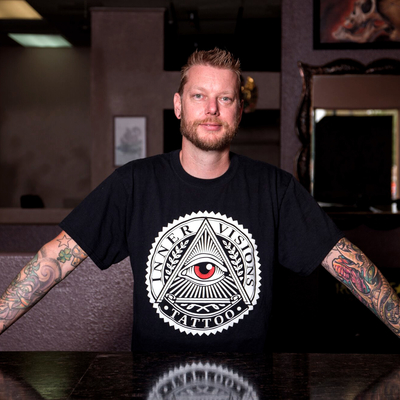 
Joe Riley has been tattooing professionally since 1998. He started his career in a small town called Bullhead City, AZ. He did not go through a typical apprenticeship, rather he was taught in a shop by being thrown into the mix in a very short amount of time. His mentors believed that he was a natural at tattooing from the very beginning. After less than a year of tattooing Joe had the opportunity to buy the shop that he had worked at, Timewarp Tattoo.

He owned the shop for about 5 years and then decided it was time to move on and leave the small town life behind. Joe did several guest spots with some of the industries best tattooists, and decided to settle in at Slave to the Needle in Seattle. This was a great learning experience for Joe working side by side with some of the industries best tattoo artists and was greatly influenced in many styles. After some time in Seattle, the traveling bug hit once again and Joe found himself traveling the country tattooing at several different conventions and doing guest spots at many different shops, once again, absorbing as much as he could from some of the best artists in the industry. He then settled in southern California at Outer Limits Tattoo where he honed his skills focusing mainly on large scale compositions. Fast forward to 2009, Joe found himself in Las Vegas and became a part of the Club Tattoo family, and has been here ever since.
From all his travels, Joe Riley has became a very diverse artist, and has mastered many styles of tattooing. He believes the key to keeping it fresh is to not lock yourself into one style, but rather to push through the boundaries of what is possible, and work with many different styles altogether. Joe has been published hundreds of times and has won dozens of awards in many different categories including: Best black and grey, best color, most realistic, most unusual, best of day, and best of show to name a few. Outside of tattooing Joe likes to keep pushing himself and his art. He paints in many different mediums including watercolor, acrylic, and oils. Joe feels the best way to be the best tattoo artist possible is to continue to push himself as an artist, whether it be on skin or canvas.