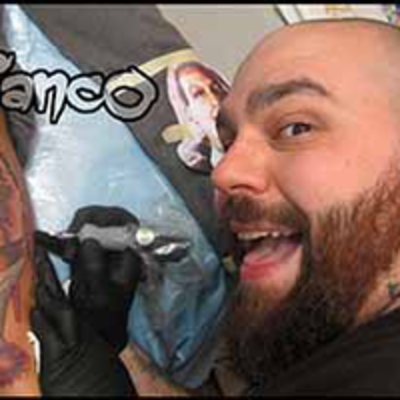 
Michael Bianco is a licensed Tattoo Artist with almost ten years of experience, the last three of which tattooing in San Francisco.
Born in Chicago Illinois, Michael’s career in art began as a Comic Book Illustrator almost seventeen years ago working on over a dozen published titles including Sherlock Holmes, the Eisner nominated Geeksville , The Marauders and Public Enemy with Chuck D.
Michael worked for a number of years at a Chicago based Animation company before beginning a career as a Tattoo Artist almost a decade ago, tattooing at local Chicago parlors like Flying Horse, The Gallery Of Ink (which he managed for a number of years) True Blue and Royal Flesh before moving out west three years ago to start tattooing in sunny San Francisco California.

For the last three years Michael has also been a part of the Ink-Fusion Tattoo Festival traveling all across the country tattooing at Comic Book, Horror Movie and Sci-Fi conventions, all of which as an Eikon sponsored tattoo artist.
His Futurama tattoo work has been featured on Comedy Central Insider with Matt Groening, he’s worked on illustrations approved by Marvel legend Stan Lee and like many of the Ink-Fusion tattoo artists he is a licensed Lucasfilm artist for all Star Wars Celebration conventions including this years convention in Essex Germany.