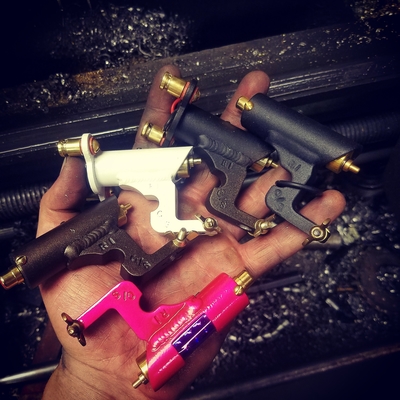 
Rue McLean owns Ruethless Irons and Also is Owner Partner of Gold Rush Collective Tattoo and a world-wide traveling artist, body piercer, and machine builder. Rue started his career in California as a piercing apprentice in the Height district of San Francisco, Anubis Warpus. After his apprenticeship was finished, Rue moved back to his first home in the Netherlands. He decided to open his own studio and work in Amsterdam. He really felt the need to recreate himself and learn as much as possible, so he became a traveling artist. During his travels, Rue absorbed any methods and techniques he could about tattooing and piercing. Some of the places he has worked in are: Isla De Margarita Venezuela, Aruba, Montreal QC, Boston, Wildwood NJ, India, Las Vegas, Miami, Midland TX, Houston TX and Albuquerque NM. He loves traditional tattoo work, Japanese traditional, anything bold and bright.