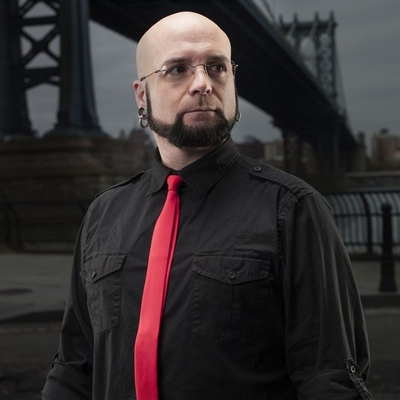 
Walter “Sausage” Frank was born and raised in Seattle, Washington. He worked as a tee shirt artist/screen printer for 11 years before moving to Anchorage, Alaska to broaden his career in art. Sausage started tattooing at Larry Allen’s Anchorage Tattoo Studio in 1999. There he apprenticed and worked until he moved to Phoenix, Arizona. Sausage worked at Club Tattoo for almost 13 years! There he worked by the side of some tattoo greats! Terry “Wookie” Hoffman, Matt Geiogamah, Chris Garcia and Joey Hamilton. Walter “Sausage” Frank has won many awards and trophies over the years. He has been in magazines, online articles and newspapers. His biggest claim to fame came when he made it to Season 4 of Spike Tv’s Inkmaster! Sausage fought hard, endured the challenges and finished 2nd. He happily gained the unofficial title of America’s Inkmaster and is followed worldwide on Twitter (sausagekingtat), Facebook (Tattoos by Sausage) and Instagram (Sausagekingtattoos). Walter “Sausage” Frank enjoys all styles of tattooing. It is the attention to detail that he enjoys most and sets him apart from other artists. He is always happy to collaborate with his clients and come up with jaw dropping artwork! Sausage loves being a family man. He is a proud father of 3 boys, Kodah, Keeghan and Parker and 1 girl Melissa-Jo. He is happily married to his wife Kristal of 10 years. So come on in to Revolt Tattoos and see what the “buzz” is all about! #JointheRevolt