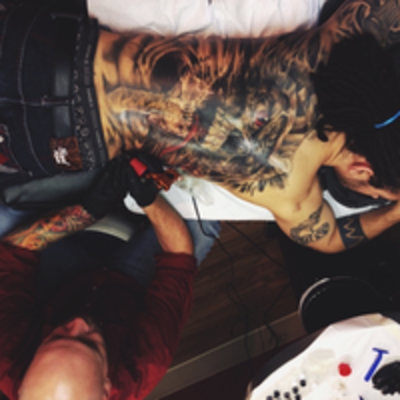 
Toby grew up on the outskirts of the village of Botkins, just 50 miles north of Dayton, Ohio. Spending countless hours in the woods surrounding his home, Toby formed an imaginary world that has influenced his artwork to this day. Toby began drawing as soon as he could hold a pencil. Only interested in graphite or black and gray drawing as a child, after long encouragement from his parents, picked up painting in acrylics at the age of 20. In 2000, an opportunity arose in the form of an apprenticeship in tattooing. Toby jumped at the chance and soon found himself tattooing full-time out of a small shop in Wapakoneta.

After spending a year and a half in that first shop, Toby thought it time to move forward to larger opportunities. He moved to Columbus and has had the pleasure to work alongside great artists in some of Columbus' premier tattoo shops. He then tattooed at the mighty Stained Skin at 1255 N. High Street for a few years.

He has recently (Aug 2016) re-located to Colorado.

When Toby isn't officially on the clock, he's working to perfect his art in all aspects.