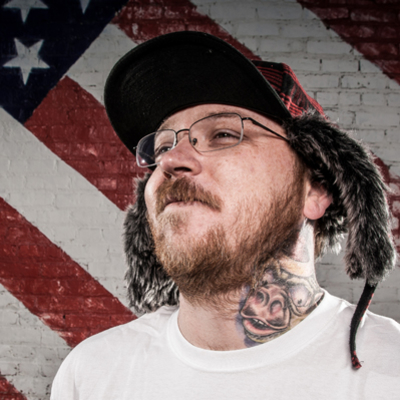 
I wanted to tattoo since 1992 when I was 11 years old and first met my father Marc and could see his tattoos extruding from his shirt. His front torso was tattooed by Sailor Moses and Scott Sterling in Biloxi during the early - mid 1980's. I believe that is where he first learned to tattoo. From there he went to Panama City Florida and worked with Adam West before moving up to northern Minnesota in the early 1990's. He died in September of 2006 when I was 25, and I gathered as much of his tattoo stuff as possible and brought it all back to Omaha.

I started my first apprenticeship a few months after his passing in November of 2006, and stayed with that company for a few years before realizing that I was stagnant in my career, with lack of opportunity for advancement. From there I used the G.I. Bill and enrolled in the local community college to earn a degree in Graphic Design. Halfway through school I met up with Lenny Renken, and started a second apprenticeship. My last year of school was also my tattoo apprenticeship, and I got to use what I was learning in school by being the graphic designer for the Shane Oneill Productions tattoo conventions.

I got married, graduated college, and started tattooing full time all in the summer of 2012. My mentor Lenny Renken has had me out on the road with him since the beginning of my apprenticeship and that encouraged my love of traveling and tattooing on the road.

I'm a street shop tattooer through and through, I do almost anything that walks through the door that is within my comfort zone. I work with so many talented artists that it is easy to make sure the client gets the tattoo they want. I enjoy painting and tattooing old tattoo flash, traditional designs are some of my favorites. I also enjoy drawing my own lettering for tattoos as well. I've always had good handwriting, and I'm sure the few typography classes I took in college only helped for the best.

I like to travel to conventions during the school year so I can spend as much time with my family as possible over the summer break. If you see me at a convention come by and say "hi", or you can find me at the shop in Omaha's Old Market area.